Hydrolix supports aggregate Summary tables. Summary tables lend themselves well to aggregations of metrics, such as min, max, counts, sum and in some cases percentiles, unique counts, or other statistical aggregations. The basic principle of a Summary table is that at time of data ingest an SQL statement is run against the incoming data with the output being written directly to a new target table.

There are two main methods of generating summary or aggregation tables described below. Batch, Kafka and Kinesis uses one methodology, the HTTP Stream API uses another.

Batch Ingest, Kafka and AWS Kinesis support Summary tables out of the box. Using the transforms ability to execute SQL, aggregations can be applied to the incoming data while also enriching the data.

For example if there is a requirement to have an enriched raw data table and an aggregated summary table, that contained hourly roll-ups of the data Kafka ingested environment would look as follows. One pool of Kafka servers would ingest, enrich and encode the incoming data for the raw table. The other pool of Kafka servers would ingest, enrich, aggregate and encode the data for the summary table. Both pools, pull data from the Customers Kafka environment. 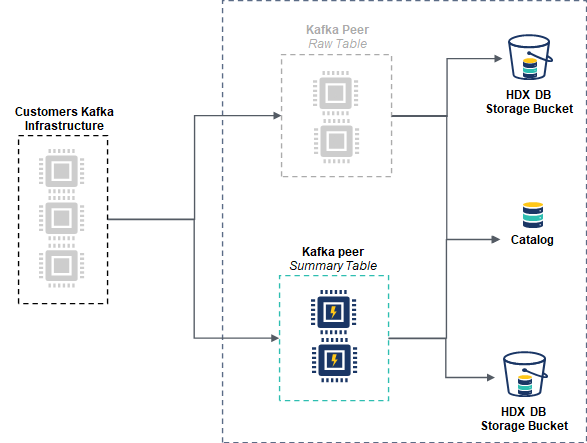 The HTTP Stream API is a special case and uses an alternative methodology for managing summary tables. This is because the data is received via a push method (http) into the system by the Stream Head which in turn puts the message onto a queue for ingest (in Kubernetes this is Redpanda). To be able to create a Summary table the HTTP Stream API uses an additional service type called a Summary-peer, these services retrieve the same raw message from the queue, apply the enrichment on the raw data (the same way a stream-peer does) and then executes their own Aggregating SQL statement.

It is important to understand the flow of data through a Summary peer as this is not the same as the other ingest methods. The data flow is such that the data has two transforms applied to it within the Summary-peer. The first transform parsed is the same that is applied to the raw data being ingested by the stream-peer - this is also called the parent table. Once this transform is applied, the resultant data then has the Summary transform applied, with the resultant output added to the Summary table.

For example:
If the raw data coming in has a column called myColumn this is type "string". The Summary transform will need to reference the column myColumn within its transform_sql and set the data type as a string (unless casting has been applied within the SQL) as well.

Note that when using Summary tables the intermediary "parent" table partitions are not written to the database. It is always expected that a "raw" table will exist to supply the "parent" data to be written.

On the assumption data is already flowing into your existing "raw" table, in order to create your summary table three items need to be created:

The first step is to create the table which will receive the summary data, more information can be found here - Projects & Tables. The table created can be the same (although a new name needs to be used) as any normal table you would create and they will often have the same characteristics. One item to bare in mind is often the aim is to "aggregate" rows this means that hot and cold write settings may need to be altered to get a good level of initial aggregation.

Create the Transform for the Summary table.

Once the table is created, the transform (write schema) needs to be created. This follows a similar format as for the regular ingestion of data, more information on transforms can be found here Write Transforms.

Even for Summary Tables a primary timestamp (datetime or an epoch) field is required. Note this can NOT however be a field generated from the Transform_sql as a now() or alike, it can be an existing column that has a function applied to it - for example: toStartOf5Minute.

The transform includes an additional field transform_sql within the settings object, this can be used for the aggregation. For example to get the count by status_code every 5 minutes the following could be used within your Summary tables transform_sql:

The basic transform for the table would be as follows:

The transform must be the default one otherwise the insert will fail, use the following in the settings:
"is_default": true

At Query time the following would be used to retrieve the data.

Min(), Max(), count(), and sum() are all good basic aggregations that can be used in Summary tables.

For more advanced metrics such as averages and percentiles further consideration should be made. This is due to the way partitions are written, where multiple pods or services can write their own partitions containing aggregations for the same periods.

For example it may seem logical to use the avg() function as part of your roll-up to get the average value over a period of time. However if this is used, as each peer will generate its own average across each partitions when it is time to query it the user will need to average the average to account for multiple partitions with multiple averages - avg(avg()) - this can lead to unexpected outputs.

In the above example a better way of calculating the average is to use two columns in the summary table, one for the sum() and one for the count() that at query time can be aggregated and then the average calculated. For example:

Another more advanced method is to use the Clickhouse functionality of Intermediate Aggregation States below.

Intermediate aggregations states are a datatype that holds only the information to compute an aggregate function. The simplest example of this is the avg() function, where the state would hold only sums and counts, or a more complex example would be the uniq() state, which holds the fixed memory HyperLogLog binary string of values it has seen already.

This stored state allows the aggregation of row data without the danger of aggregating an aggregate while still providing a performance gain. More information on this functionality can be found here - on the Clickhouse site - Intermediate Aggregation States

To use this functionality within Hydrolix the transform_sql should have the functions suffixed with the State keyword. This causes this intermediary state to be created. At time of writing Hydrolix stores this as a String so the data generated should be cast to a nullable(String). For example an average download time in seconds stored state would be specified as:

avgState is the avg() function with the State suffix attached to store the intermediary state for average. The ::Nullable(UInt64) sets download_time_sec to a Nullable UInt64 type - needed for reading the data out of the source table. The ::Nullable(String) encompasses the definition to make the state stored as a String.

For example, a complete SQL statement where a calculation for average and the 50th percentile is required is spefied as follows:

If query is run directly on this table we then see the states stored:

To retrieve and calculate the average and percentile from this state the Query should use the Merge Suffix with an AggregateFunction() cast for the data-type.

avgMerge is the merge function that merges at query time the intermediary states.
The cast to AggregateFunction() is required as the state is stored as a String. More information on this datatype is here - Aggregate Function.

Each Summary table created should ONLY have one aggregation period. For example toStartOfFiveMinute(). A table can not contain both a toStartOfHour() and toStartOfDay() aggregation.

The infrastructure to start loading your Summary tables now needs to be created for Batch, Kinesis and Kafka these follow the same methods as is seen for the Raw data.

For the HTTP Streaming API an additional service source is created via the Summary Sources API end-point.

For Kubernetes the following example could be used

This should be done carefully, as memory and CPU utilisation will likely be higher with higher levels of aggregation. A good benchmark to use initially is to take the CPU and Memory utilisation used on the stream-peer and add 10-20% to both. For example if you have 8GB of RAM specified for your RAW table ingestion it would be worth starting with 10GB as a starting point.

An important aspect of Summary Tables that should not be overlooked is the use of Merge. Merge is the Hydrolix compaction service that takes written partitions and evaluates how the can be combined for better compression, faster retrieval and more efficient storage.

Merge has the ability to make use of as sql_transform the same as other ingest methods. This provides the ability to recalculate items such as intermediary states, sum, count etc states and compact them.

For example, the below uses a new function called MergeState that can be used to Merge the intermediary state of a p95 calculation.

In working with Summary tables there are some standard (and in some cases temporary) "Gotchas" we found that once understood are easily navigated.

Updated about 1 month ago